A Look at Radiological Water Contaminants 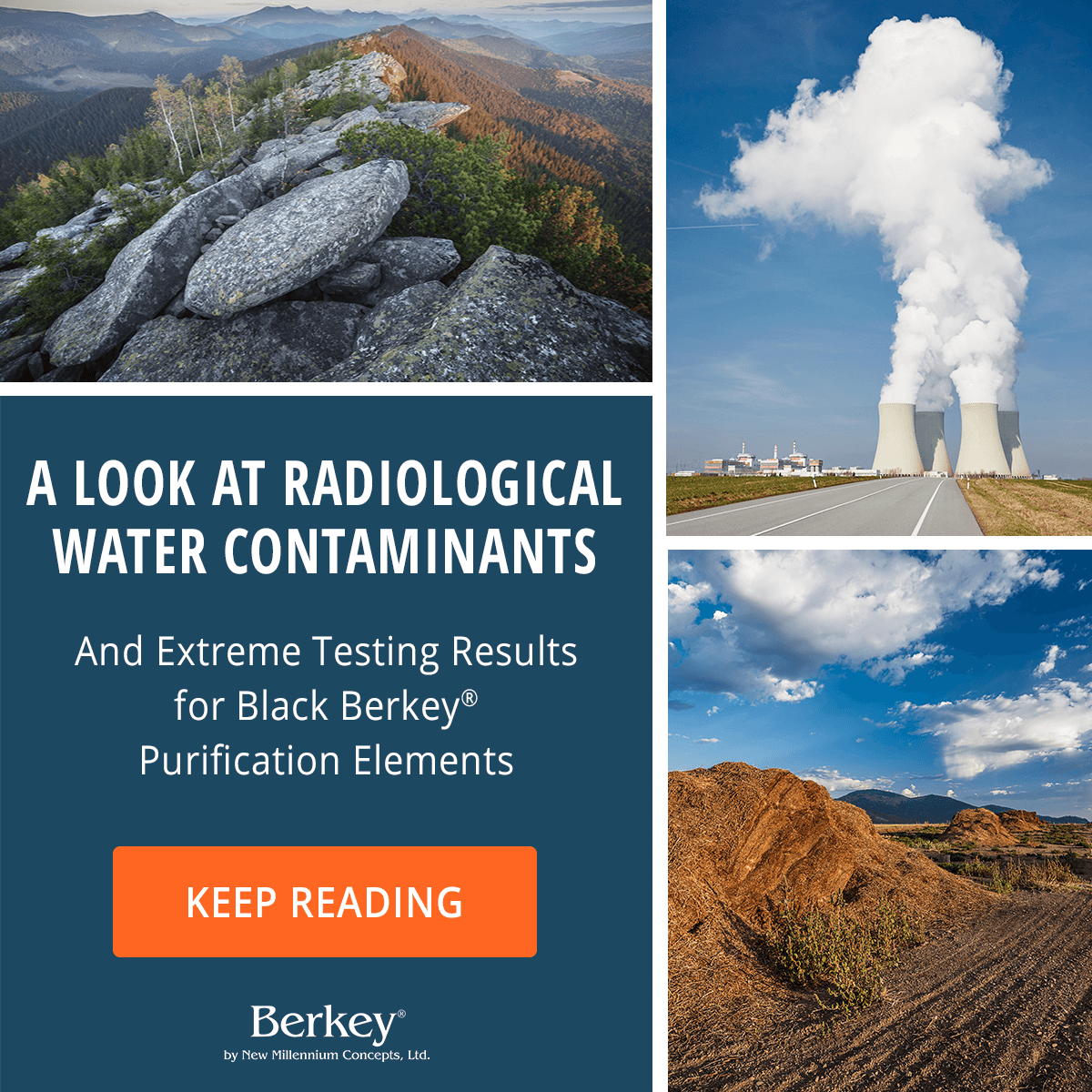 What are radiological water contaminants?

Radiological water contaminants are undesirable radioactive substances that have entered a water supply. They are also known as radionuclides. Typical, naturally-occurring radiologicals found in drinking water include, “...isotopes of radium, uranium and radon, among others. Fission products from man-made nuclear reactions are also of concern today, particularly radioactive cesium and iodine.” 1

Naturally-occurring radiologicals are found everywhere: the earth’s crust, food, the sun’s rays and even our DNA. Radionuclides like uranium, radium and radon are often found in areas with granite bedrock. 2 Potassium is present in bananas, brazil nuts and carrots among other foods.3

Naturally Occurring Radioactive Material (NORM) is defined as, “Materials which may contain any of the primordial radionuclides or radioactive elements as they occur in nature, such as radium, uranium, thorium, potassium, and their radioactive decay products, that are undisturbed as a result of human activities." 4

Human activity at times alters and disseminates naturally-occurring radiologicals, increasing the potential for human exposure. Referred to as Technologically Enhanced Radioactive Material (TENORM), such radiologicals may be the result of waste from:

Radiologicals can also originate from man-made sources, such as waste from nuclear power plants and some medical facilities. Released, or improperly stored radioactive particles can seep into groundwater, or bind to particles of dust in the air. These particles can then travel for a distance before settling into surface drinking water sources , like rivers, lakes and streams that supply a community’s drinking water.

What technical information will help me understand radiological contaminants?

There are three major types of ionizing radiation with different levels of penetration and particle size:

How radiation exposure is usually expressed

Radiation exposure is usually expressed in a unit of measure called millirem.6 It represents a measure of the energy deposited in human tissue, and its ability to produce biological damage. According to the EPA, in the US, the average annual radiation dose per person is 620 millirem.7 Radioactivity in drinking water measurements is typically expressed in picocuries per liter.

What are the potential health risks?

Long-term exposure, or brief exposure to radiologicals in high doses, is known to lead to cancer. This includes cancers of the lungs, skin, bone, liver, kidneys, stomach and thyroid glands, and many other human tissues.

How does exposure typically occur?

Radiologicals that are known to emit alpha particles (alpha emitters) are found in rock and soil, and can get into groundwater. Alpha emitters do not penetrate the skin deeply. In fact, clothing can stop them. However, alpha particles can be ingested, typically breathed in as radon. Radon is a colorless, odorless gas known to cause lung cancer. If you live in an area at risk for radon (or to find out if you do), be sure to visit the EPA website to learn more: EPA.gov- Radon information

Exposure to Beta and Photon Emitters

Beta and photon emitters are serious concerns, and produce even stronger effects than alpha emitters. They can be found in surface water around nuclear power plants as well as some industries and medical facilities. When such sites dispose of their radioactive waste, it can sometimes leach into the soil where it can potentially get into groundwater and then into water supplies.

One specific example of a beta emitter is lead-210, which is is a radioactive form of the metal that has decayed from uranium-238. 8 It is commonly found in high-phosphate fertilizers, and is known to be a cancer-causing component of cigarettes.9

Radiologicals that produce gamma rays are found in medicine:

Exposure to gamma rays can occur as a result of background radiation, or the naturally-occurring decay of radioactive particles in the environment. All people experience an annual, low-dose exposure due to this process. Those in nuclear-related industries generally receive a slightly elevated level of exposure.

What are the EPA drinking water standards for radiologicals?

Drinking water standards for radionuclides were first set in 1962. These standards were updated by the EPA in 2000 and called the Radionuclides Rule.10 The new rule established standards of:

How can I protect myself and my family from exposure to radiologicals?

Please note that, “Boiling tap water does not get rid of radioactive material.”11

Public water supplies are supposed to be tested and treated to meet US EPA standards under the Safe Drinking Water Act. Check the yearly water report for your local municipality to research what you can expect in terms of both naturally-occurring and man-made radiological contaminants in your area.

If you are on a private well however, you may not know if, or at what level, radiation is present in the water. Most well owners don’t consider testing for radiological contaminants- mainly because they don’t know they may be at risk. If you are a homeowner on your own well, seriously consider having your water checked for potential radiological contamination.

Consider a water filter for naturally-occurring or potentially atypical radiological levels in your area.

With a gravity-fed system, like a Berkey ® purifier, there are two essential things to check for when specifically considering radiologicals:

In a crisis scenario, such as an accidental or weaponized nuclear incident, it is important to have a survival water filter truly capable of removing or greatly reducing radiological contaminants at the ready.

In such cases, the primary objective for those in a contaminated hot zone would be to get to a non-contaminated zone as quickly as possible. Therefore, you would want to choose a solution that fits the following requirements:

As we will discuss, Berkey ® Systems using Black Berkey® Purification Elements are the ideal choice for everyone considering a gravity-fed, survival water filter.

Know What to Do Post-Evacuation

For those who are unfortunate enough to be caught in a radiological contamination zone, it is recommended that the Black Berkey ® Purification Elements be replaced as soon as is feasible post-evacuation. This is because the more radiological contaminants the elements remove, the more radioactive the elements themselves become. Consider having backup sets of Black Berkey® Purification Elements in your emergency kits or bags at all times to make the switch quickly.

Some filter elements may show strong results in a test using one water sample. In contrast, NMCL believes that it is vitally important that the reduction capability of our Black Berkey ® Purification Elements be tested over time. Therefore, Berkey® Systems conducted the radiological contaminant reduction testing of the Black Berkey® Purification Elements to 50 gallons; an extreme situation and test.

Our approach provides information on the rate of decline in efficiency, and verifies that the rate of decline is not significant. For example, in our Gross Alpha Reduction Test, the efficiency reduces from 99.2% to 98.7% after 50 gallons. This represents a reduction in efficiency of only 0.5% (1/2 of 1%) after 50 gallons, which likely indicates that at the end of the 3,000 gallon life of the element, the reduction level should still be around 70%. Also, take a look at our Gross Beta Reduction Test and Uranium Reduction Test, both of which similarly demonstrate the reduction capabilities of the Black Berkey® Purification Elements over time.

Your best protection against radiologicals in water is to have a water purification system that has been rigorously tested to remove radionuclides to below detectable levels. In a crisis situation, Berkey ® Water Purification Systems are portable, travel easily, and function without electricity or water pressure, making them the ultimate survival tool.

Discover more about our extreme testing by reading these related articles or visiting our Knowledge Base: