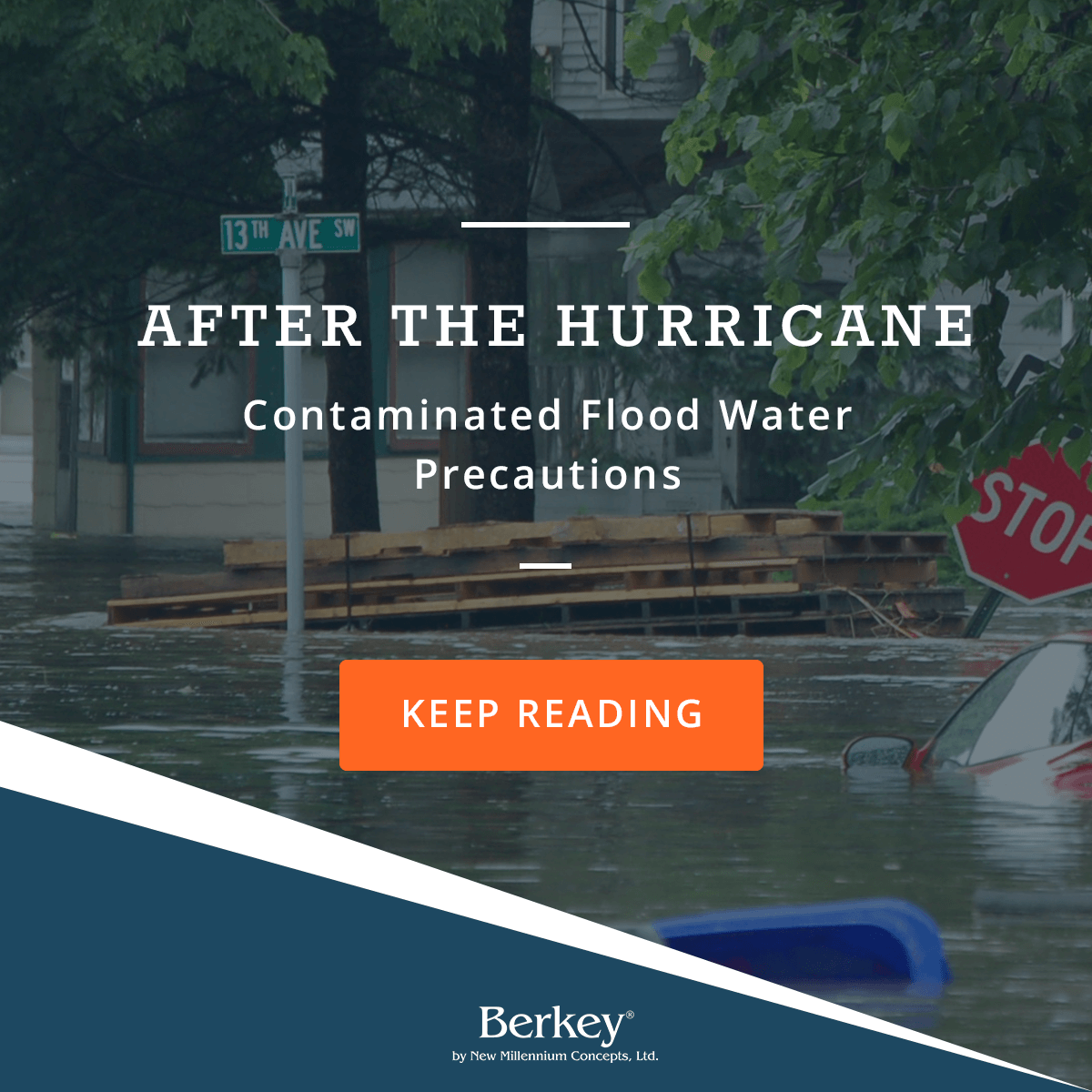 When a hurricane is predicted make landfall, being prepared with an adequate supply of clean drinking water ahead of the storm becomes a priority for most people. When flood waters recede however, the danger is not necessarily over. Residents are faced with a new and daunting challenge - the contaminated water left behind. We’ll examine how the recent hurricanes in Texas and Florida have impacted the safety of drinking water, and how the aftermath of a hurricane can can provide valuable lessons for the future.

What have the recent hurricanes done to local water?

In addition to the catastrophic destruction unleashed by heavy rains, high winds and coastal storm surges, Hurricanes Harvey and Irma have also damaged wastewater treatment systems in the cities they engulfed. The result was sewage spills that put residents at potential risk for waterborne illnesses.

The EPA reports that at least 40 of the 1219 wastewater treatment centers in the areas surrounding Houston are temporarily out of commission in the aftermath of Hurricane Harvey. 1 According to a Bloomberg report, St. Petersburg and Orlando were flooded with 500,000 gallons of wastewater after Hurricane Irma. An additional 6 million gallons seeped into the coast of Key Biscayne.2

Sewage is the combination of human waste and other wastewater (including all bath and toilet waste, laundry wastewater, and kitchen waste that drains down the kitchen sink or through the dishwasher) and other similar waste that comes from domestic and commercial sources. Raw sewage is the sewage mixture before it has received any filtration or chemical disinfection.3

Raw and inadequately treated sewage contains pathogens (both bacteria and viruses) that can lead to serious health problems. The EPA reports that sewage overflows greatly increase the risks of waterborne illness when someone either comes into contact with or drinks the contaminated water.4 Children, the elderly, and pregnant women are particularly vulnerable to illnesses caused by the pathogens in sewage. After a storm, authorities typically issue health advisories warning people to stay away from flood waters that are contaminated by raw sewage and to boil drinking water.

How does sewage get into the water after a hurricane?

Wastewater treatment plants (also known as sewage plants) are especially vulnerable during hurricanes because they are usually in low-lying areas. This allows treated sewage to be easily discharged into receiving waterways. When plants became flooded after the hurricanes, raw and partially-treated sewage may spill from pipes, open air basins and holding tanks and pumps. In addition, power outages during the storm may simply shut down the plant.5

Hurricanes also reveal the vulnerability of much of our aging infrastructure, which is unable to withstand damage from extreme storms. Thus, the potential for these types of spills will likely occur with future hurricanes. According to an EPA estimate, strategies to improve the nation's wastewater pipes and infrastructure will cost an estimated $271 billion dollars.6 (Read our post, "Understanding Aging Water Infrastructure in the US" for additional information.)

Is the flood water contaminated?

An independent study organized by the New York Times found that the floodwaters in two Houston neighborhoods are contaminated with bacteria and toxins that pose a health risk to residents.7 In one Houston suburb, the study found levels of E. coli bacteria (found in human fecal waste) at over four times the level considered safe. At a second Houston location, scientists found the water was tainted with exceedingly high levels of E. coli, at levels 135 times those considered safe, as well as elevated levels of pesticides, arsenic, lead and other heavy metals. A study conducted by Texas A&M of floodwater samples from the Houston area revealed levels of E. coli -- bacteria that signal the presence of fecal matter -- 125 times higher than is safe for swimming.8

What precautions should I take after a hurricane?

Public health officials are strongly advising that residents impacted by Hurricanes Harvey and Irma take certain precautions when returning to their homes. The CDC recommends the following measures to help protect your family from illnesses associated with contaminated flood water:9

What other precautions can I take after a hurricane?

The Bottom Line: A Final Barrier System is Indispensable

After a hurricane, two critical concerns become evident at the point where water enters our home (point of entry): the high risk of microbial contamination and the vulnerability put on public water utilities to effectively remove them. The most effective strategy for having control over the water you consume is to have a final barrier system already in place. Purify your tap water for drinking, cooking and preparing food, and consider using purified water for hygiene purposes when you suspect potential sewage contamination to be a concern.

Berkey® systems can easily purify ordinary tap water and well water, yet are powerful enough to efficiently purify raw, untreated water from sources such as remote lakes and streams. Before and after a hurricane, the portable, gravity-fed Berkey® system provides an essential water security system for drinking, cooking and hygiene for your family.

Discover more about Black Berkey® Purification Elements and Berkey® systems by reading these related articles or visiting our Knowledge Base: