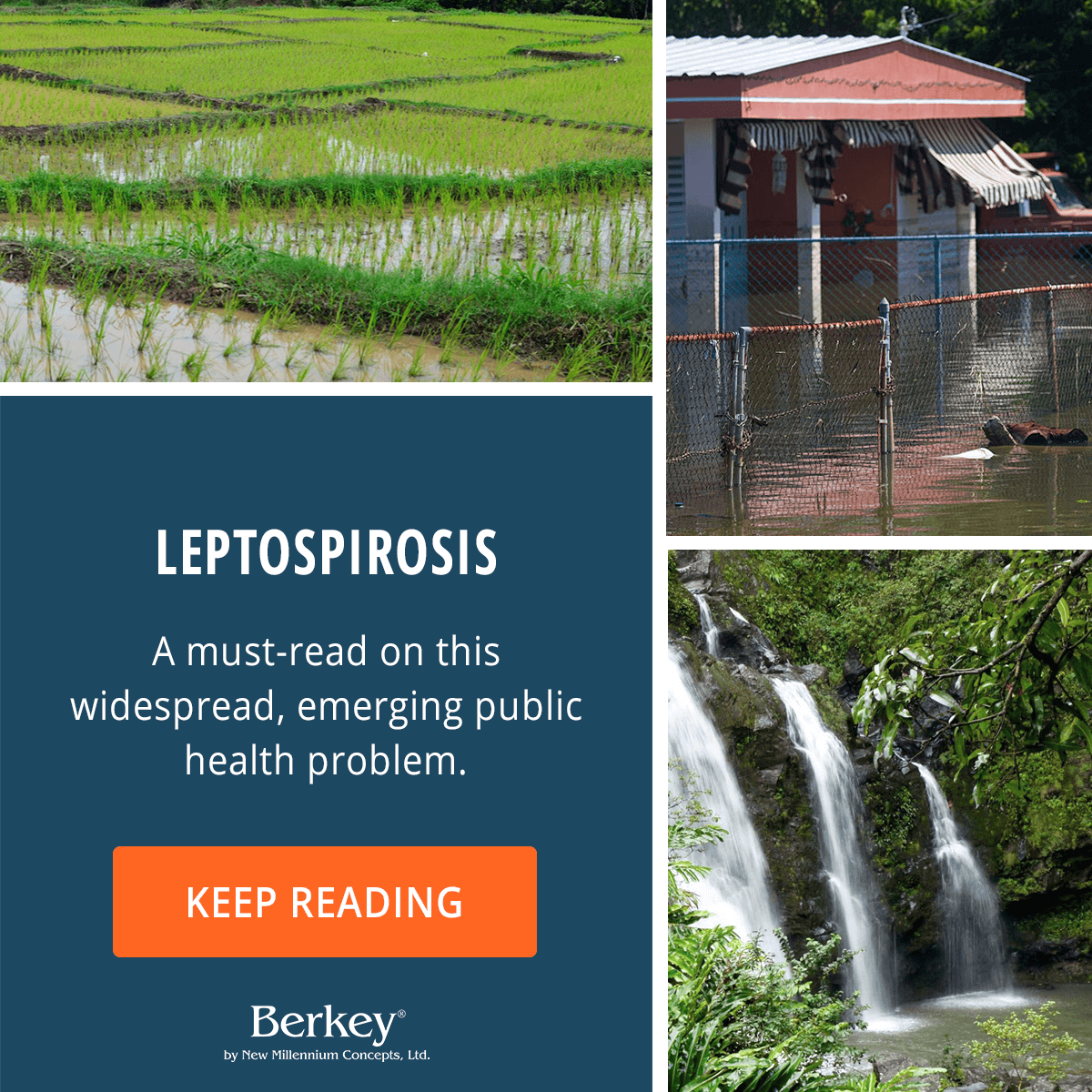 Globally, Leptospirosis is a widespread, emerging public health problem.1 It is a potentially fatal illness that may occur when people come into contact with harmful germs in their environment.2 The bacteria that cause the disease, Leptospira, may be contracted through direct contact with infected animals or their habitats, along with indirect contact via the ingestion of contaminated food or water.3 While most cases are mild, causing influenza-like symptoms, some cases progress to a lethal form called Weill’s disease.4

How do people typically get Leptospirosis?

According to the World Health Organization, “Humans become infected through direct contact with the urine of infected animals or with a urine-contaminated environment. The bacteria enter the body through cuts or abrasions on the skin, or through the mucous membranes of the mouth, nose and eyes.”5

While rodents are the most common carriers, Leptospira bacteria may be found in cattle, pigs, horses, goats, dogs and wild animals.6 This means that virtually any raw, outdoor water source is vulnerable to contamination. People may contract Leptospirosis due to exposure to the bacteria during occupational or recreational activities, or due to consuming raw, untreated water sources or contaminated food.

Numbers in the US and Globally

In the United States, “It is estimated that 100-150 Leptospirosis cases are identified annually ... About 50% of cases occur in Puerto Rico."7 States with warm, humid climates experience more occurrences than those with cooler climates. Hawaii specifically posts signs to warn visitors not to be, “...exposed to fresh water ponds or streams ... especially if you have open cuts or sores.”8

Certain occupations put people at higher risk of exposure to Leptospira bacteria due to interactions with animals or vulnerable environments. Examples include:

A Note Regarding Agricultural Communities

According to the World Health Organization, “In some countries, practically the whole population is at risk as a result of high exposure to contaminated water in daily activities, e.g. working in paddies and sugarcane plantations.”11 Agricultural communities quite simply experience higher rates of infection due to being in constant contact with animals, soil, and raw water.

In the United States, the most common source of exposure is through recreational activities. According to the CDC:

Leptospira bacteria thrive in “High humidity and neutral (6.9–7.4) pH,” with “stagnant water reservoirs—bogs, shallow lakes, ponds, puddles, etc.—being the natural habitat for the bacteria.”13 As long as urine from the infected animal remains moist, or has access to a water source, Leptospira may survive.

While historically considered a rural disease, Leptospirosis, “... has disseminated from its habitual rural base to become the cause of urban epidemics in poor communities of industrialized and developing nations.”14

Cases of Leptospirosis are known to spike in poor, urban areas with tropical climates during periods of higher rainfall. The NCBI explains further, “For example, the cyclic pattern of spring and summer rains can increase the incidence of water-borne diseases; and, this annual pattern of rains can be further exacerbated by natural disasters.”15

Flooding due to natural disasters such as monsoons or hurricanes can inundate communities with potentially contaminated water. Such scenarios typically pose three major concerns:

In the event of a water shortage or disruption, residents may turn to raw, outdoor sources such as lakes, rivers, or streams, which are vulnerable to Leptospira bacteria. Consuming untreated or inadequately treated raw water can put people at serious risk of infection.

Learn more about post-hurricane flooding specifically in our article, “After the Hurricane: Contaminated Flood Water Precautions.”

What are the symptoms of Leptospirosis?

Referred to by some sources as a “mimic disease,” cases of Leptospirosis can be difficult to identify. It is often confused with dengue fever, influenza, meningitis, hepatitis and other viral hemorrhagic fevers.16 According to the CDC, Leptospirosis can cause a wide range of symptoms:

Course of the Disease

The course of the disease typically involves two phases: a septic state and immune response. The first phase generally involves the abrupt onset of fever, chills, headache, muscle aches, vomiting, or diarrhea, and lasts 3-7 days. After a one to three day period with minimal symptoms, the immune response begins and antibodies appear in the blood. Many symptoms return, and the individual may continue to be sick for days or weeks longer.

A more severe form of Leptospirosis, comprising 5-10% of cases, is known as Weill’s Disease. According to the NCBI, it… “has a fatality rate of 5-10%; and, the rate increases to 20-40% with hepatorenal involvement and jaundice.”19 (Heptorenal- involves a rapid decline in kidney function.20)

The disease involves the symptoms mentioned above, along with severe damage to the liver, kidneys and/or other organs. Recovery can take years, and long-term effects have been observed.

As with other zoonotic diseases (spread from animals to humans), the CDC explains:

Anyone can become sick from a zoonotic disease, including healthy people. However, some people may be more at risk than others and should take steps to protect themselves or family members. These people are more likely than others to get really sick, and even die, from infection with certain diseases. These groups of people include:

How can I protect myself and my family from zoonotic diseases like Leptospirosis?

Prevention is the key. Here are measures for minimizing your risk of exposure to Leptospira bacteria:

USE AN APPROPRIATE FINAL BARRIER SYSTEM FOR DAILY WATER PURIFICATION

One of the most important and concrete steps anyone can take to reduce the risk of Leptospirosis is to put an appropriate final barrier system in place to purify your family’s drinking water on a daily basis. It is important to know that Leptospira is an extremely small pathogenic bacterium. The size of most pathogenic bacteria range from .5 micron and larger. Whereas, Leptospira is a mere .2 microns in diameter. Therefore it is essential that a proper water purifier be utilized. Most water filters do not remove bacteria and among those that do, the vast majority have tested removal capabilities utilizing bacteria that are .5 microns and larger. Use purified water for all food preparation, rinsing of dishes and cookware, and daily hydration.

The Black Berkey® Purification Elements were tested to an extreme level, with a far greater amount of Leptospira bacteria than typically found occurring in nature. So, even in a case where Leptospira bacteria may exceed typical natural levels, you know that the Black Berkey® Purification Elements will remove or greatly reduce this potential contaminant from your drinking water. Review the testing results: 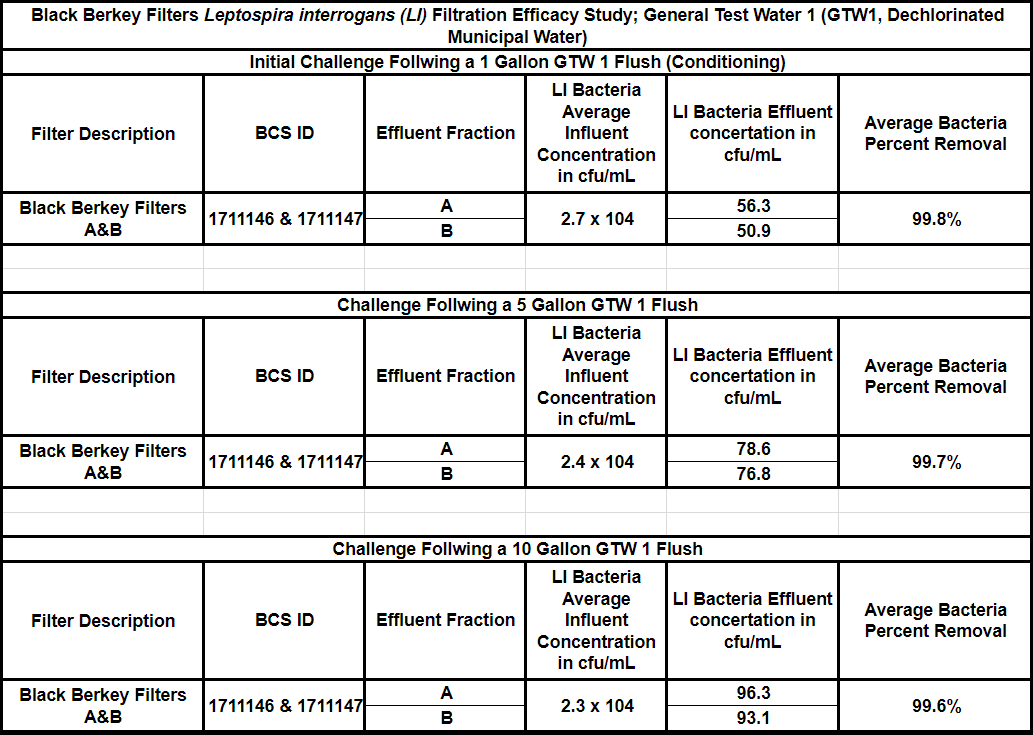 Black Berkey® Purification Elements were tested to extreme levels in order to insure that Leptospira would be greatly reduced from potentially contaminated water. The water used in testing the Black Berkey® elements was somewhere between 1,174 and 46,740 times more contaminated than naturally-occurring contamination levels.

(The concentration levels of Leptospira in the pre-filtered test water had 24,600 Colony Forming Units per 100 mL of the influent Test water. Recent testing for Leptospira in Hawaii indicated that contamination levels found in coastal streams in Hawaii ranged between 10 genomes/100 mL and 398 genomes/100 mL.22 There is an average of approximately 19 Colony Forming Units per 100 genomes. Therefore, 2,460,000 CFU’s in the pre-filtered test water would equal about 467,400 genomes per 100 mL of water.)

MORE ON THE PRECEDING DATA

To further understand the preceding data, consider the following terms:

CFU (Colony Forming Unit)- A CFU (Colony Forming Unit) is a is “...a unit used to estimate the number of viable bacteria or fungal cells in a sample.”23 Biology Online offers a more in-depth definition: "A measure of viable cells in which a colony represents an aggregate of cells derived from a single progenitor cell. Supplement. CFU is used to determine the number of viable bacterial cells in a sample per mL."24

The Median Ratio Between CFU and Genomes

Colony Forming Units and genomes are not the same thing. Measuring one does not mean one will find exactly the same number of the other. In the testing of other bacteria contaminates (in this case S. pneumoniae), it was determined that the median ratio between the two is about 0.19. So, for every 19 colony forming units, there are approximately 100 genomes. And keep in mind, this is on the conservative side.26

System Use In Cases of Extreme Biological or Viral Contamination

Please note, as an additional precaution, if using a source of water that you believe might contain extreme viral and bacteriological contamination such as Leptospira or E. coli bacteria, it is recommended by the CDC, EPA, and other organizations that approximately sixteen drops of plain bleach (sodium hypochlorite) or iodine per gallon be added to treat the source water before purifying. This should kill minute pathogens such as viruses, within 30 minutes. Simply add the drops to a pitcher of water, wait a half hour and then pour the treated water into the top chamber of your system. The disinfectant will be removed from the treated water entirely with the Berkey® system, including any odor or taste.

* Please use only room-temperature water with your system. Using boiling water can cause damage to the purification elements inside the Berkey® system.

Berkey® Water Purification Systems address a broad universe of potential contaminants, including viruses, bacteria, pesticides, pharmaceuticals, heavy metals and even radiologicals while leaving in the healthy minerals your body needs. Confidently use your Berkey® System as a final barrier solution daily.